Interesting facts from the Small Cell Rulemaking.  A signal at 3.5GHz would have 29% reduced range compared to BRS/EBS (2.5GHz), 45% compared to PCS (1.9GHz) and 75% compared to the Cellular (850MHz) bands.
Half of this band is currently used for receive frequencies for earth/satellite stations in 37 cites and adjacent radar systems exist from 3650-3700MHz.
There will be large exclusion zones due to incumbent use of the spectrum.  West Coast, East Coast, Gulf Coast, Hawaii, and Guam. Approximately 190 million people or 60% of the US population would not have access to small cell technology in the 3.5GHz band.  From the map below, the only Top 10 markets that could use this frequency band would be Chicago and Detroit with Detroit being a question mark due to issues with Canada.
FCC Small Cell Definition
Small cells are low-powered wireless base stations intended to cover small indoor or outdoor areas ranging in size from homes and offices to stadiums, shopping malls, and metropolitan outdoor spaces. Small cells are typically used to extend wireless coverage to areas where macro cell signals are weak or to provide additional data capacity in areas where existing macro cells are overloaded. Small cells are also characterized by their inclusion of novel sensing technologies such as environmental recognition and auto-configuration. (Paragraph 30, FCC 12-148A1)
The FCC has proposed a multi-tier licensing framework:
A Spectrum Access System (SAS) similar to the Television Whitespace Database used to coordinate unlicensed usage of the UHF broadcast TV whitespace. SAS would manage CBS access and ensure that lower tiered users will not harm federal and FSS users.

Last week the FCC released its Notice of Proposed Rulemaking for the Service Rules for the Advanced Wireless Services H Block.  So despite the fact that the H channel in discussion here are virtually adjacent to the PCS block of spectrum, they are referred to as AWS H.  I'll continue to call them PCS H because that have no relationship with the spectrum commonly referred to as AWS (1.7 and 2.1GHz).  My primary question as I reviewed this rulemaking, was how the auction would be structured so there would be interest for this spectrum block, beside Sprint.

Clearly, this spectrum block is more valuable to Sprint, since it can be combined with its nationwide PCS G block to enable Sprint to migrate to a 10x10 LTE channel from its current 5x5 LTE channel.  Doubling their channel size will get this LTE deployment on par with Verizon, AT&T, and T-Mobile's initial deployments.

Interestingly, the FCC doesn't comment to the use of the channel for LTE, they consider a deployment with CDMA more likely.  This is probably the only way to think that there will be bidders beside Sprint.  A T-Mobile or AT&T could purchase this spectrum for additional WCDMA capacity since a WCDMA channel would fit perfectly in this block, but I believe that a deployment of WCDMA in this block would be delayed by the 3GPP standards board in the same way that Sprint's LTE deployment would be waiting for standards body support for a new band plan. 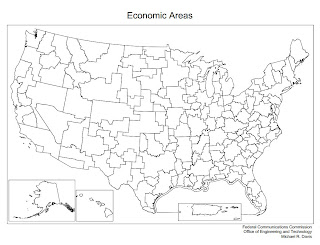 Two other interesting notes from this rulemaking.  The FCC is proposing to issue the spectrum with Economic Area (EA) Geographical Licensing.  Above is a FCC map depicting the recognized Economic Area boundaries.  Evidently EA licensing was chosen to encourage build outs in rural areas.  Given that the build out requirements are easily met by building only the large cities first, I don't agree with this logic.  More likely, the EA licensing allows the FCC to receive a higher price for rural areas since their POPS roll up within a more valuable metropolitan area.

The licensees will receive 10-year licenses with the requirement that 40% of the POPS are covered within 4 years and that 70% are covered before the license is renewed after year 10.  Neither of these requirements will drive investment into rural areas.

This spectrum will be challenging to utilized near the borders: San Diego, Detroit, Buffalo, and McAllen/Brownsville since Canada and Mexico are running 3-4 years behind the US in spectrum policy.  The use of this spectrum in border markets has to be done without interference with the Canadian and Mexican systems currently using this spectrum.

Lastly, this spectrum comes with a requirement to share the microwave relocation costs that Sprint and UTAM incurred to make the PCS G block usable.