One of the benefits of Allnet Insights' Spectrum Ownership Analysis Tools, is the repository of monthly releases that we have accumulated. With the USA Mobile Carrier Tool we have monthly versions going back to July 2012.  Each of our historical tools details spectrum ownership and the variety of spectrum depth analysis modules that were supported at that time. Looking next at the lower mid band spectrum, former licensees like SpectrumCo, Leap Wireless, and MetroPCS still control blocks of AWS-1 and PCS spectrum.  This view of spectrum ownership also allows you to see how Verizon consolidated their AWS-1 spectrum holdings with SpectrumCo's holdings into a 20 MHz block through spectrum license trades with T-Mobile and their MetroPCS licenses.  Today Verizon controls the lower 20 MHz of the AWS-1 band and T-Mobile controls the upper 25 MHz in the New York / New Jersey counties. It is interesting then to look at our County Analysis module to see the detail on each carrier's spectrum depth.  It is noteworthy to mention that Verizon has 119 MHz of spectrum in most of the New York / New Jersey counties with AT&T trailing with 91 MHz of spectrum.  Verizon still sits with rough the same amount of spectrum although they replaced all of the 700MHz spectrum they sold to AT&T and T-Mobile with SpectrumCo spectrum and AWS-3 spectrum while AT&T has growth while AT&T has grown their spectrum depth in the same counties to 161 MHz.

With the recent industry press indicating that T-Mobile was positioning its self to purchase Verizon's 700 MHz A Block, I decided to dive into the Spectrum Analysis Tool to see what kind of geographic area Verizon's licenses would provide T-Mobile with low band spectrum. 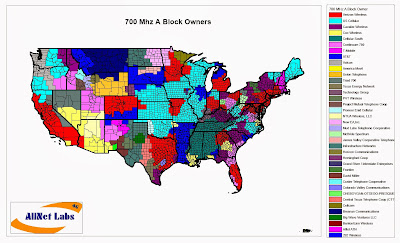 Clearly it would not be a spectrum purchase to provide coverage in rural areas since it doesn't address the rural areas in the western United States with the exception of western Colorado.  Looking at it on a Cellular Market (CMA) basis, this spectrum would provide T-Mobile with low band spectrum in all 15 of the Top 20 markets but only 25 of the Top 50 markets.  This includes both the Verizon spectrum and T-Mobile's 700MHz spectrum acquired from MetroPCS.

To acquire the remaining 700 MHz A block spectrum in the Top 20 markets, T-Mobile will need to be talking to:

It is interesting to look at the details of Verizon's spectrum purchase from US Cellular in the St Louis market area (EA-96).   Many industry sources talk about how purchase will provide 20MHz for Verizon's LTE.  While this is true, it should not be confused with Verizon deploying a 20 x 20 channel.  As can be seen from the Spectrum Grid view of AllNet Labs' Spectrum Ownership Analysis Tool, Verizon is purchasing the AWS B channel and previously owned the F channel.  Although Verizon will own 20 MHz of spectrum, it is not contiguous and until they can deploy Release 12 software code into their network, they will have to operate this spectrum as two separate 10 MHz channels.  Release 12 is likely a 2015 or maybe 2016 release since operators are either planning or deploying Release 10 currently.
The industry talks alot about Carrier Aggregation (CA) but there are several facts that are not well understood.  First, Release 10 includes the functionality for carrier aggregation but the frequency band definitions for the US are not included until Release 11.  Another point that needs to be understood is that the initial definitions require that aggregated carriers be in contiguous blocks in different spectrum bands (inter-band) or in separate blocks but in the same band (intra-band).   For Release 11, only 2 carriers can be aggregated together.  For Release 12, Verizon has sponsored a work group that will allow 3 carriers to be aggregated, 1 from the 700MHz band and 2 different carriers from the AWS band.  Thus, Release 12 will be necessary for Verizon to aggregate their two AWS blocks of spectrum with their 700 MHz LTE.

The Spectrum Grid view is sorted by the EA geographical area which show that the AWS B and C licenses have not be dis-aggregated.  The A channel licenses do show discontinuity since they were originally auctioned as CMA licenses.  AT&T through their Leap purchase will strengthen their AWS ownership in this market.
To look at the competitive picture for spectrum in the St Louis market (EA-96) we can look at the
Company By Band worksheet from the AllNet Labs' Spectrum Ownership Analysis Tool.  Looking first at Verizon, we can see the variety of spectrum depths across the EA that Verizon indicated in their FCC filing. Verizon will range from 62 MHz to 117 MHz depending on the county.  The only county that Verizon controls 117 MHz is Montgomery County, MO which is 40 miles west of St. Louis.
Looking at the other carriers in this market we see that US Cellular will still control between 32 MHz and 69 MHz, while AT&T with their Leap purchase will control between 61 MHz and 105 MHz.

When Clearwire first offered wholesale access to its spectrum, it was using the WiMax technology.  It had built this technology in the 2.5GHz band and it was covering up to 80 markets by the end of 2010.  At this time Clearwire provided meaningful WiMax coverage in each of their markets for Sprint, Comcast, Time Warner, and Best Buy to provide their customers 4G Only WiMax devices.  Essentially, Clearwire's WiMax network had broad enough coverage that these operators could selectively offer their customers service in the markets that Clearwire offered WiMax service.

As Clearwire has embarked on the TDD-LTE strategy, their wholesale model has gotten a bit more complex.  First, they continue to sign up relatively small partners for their WiMax wholesale offering:  Simplexity, Freedom Pop, Best Buy, CBeyond, Mitel, NetZero, Locus, and Kajeet.  They have Sprint already signed for Wholesale Access to the forthcoming TDD-LTE network and added Leap to the WiMax partner list early in 2012.

Leap demonstrates the change of direction for wholesale agreements for the TDD-LTE network.  For their TDD-LTE roaming strategy, a roaming partner would need a "thin" LTE network providing coverage in their markets.  They would then roam over to the Clearwire TDD-LTE "hot spots" only for capacity.  Sprint's 5x5MHz FDD-LTE deployment would qualify as a "thin" LTE deployment.  This implicit requirement for a "thin" coverage network, eliminates non-carriers from the TDD-LTE wholesale process since it would be difficult to sell "spots" of coverage across Los Angeles if you didn't have service already over the area.

In addition, the quantity of sites in the Clearwire LTE plan started at 8,000 of their 16,000 sites, was reduced to 5,000 sites and recently has arrived at 2,000 sites.  This has increased the challenge of finding wholesale partners with this very limited coverage.