Last month, Telus applied and was approved to lease part of the AWS-4 spectrum band in Canada from Terrestar.  Terrestar owns both parts (uplink and downlink) of the AWS-4 band for all of Canada.  In Canada, the AWS-4 band is still configured for duplex (FDD) operation where in the US, Dish received approval to operate all of the spectrum for downlink.

Telus will be leasing the spectrum in the most urban areas of Canada, not including Toronto with typically 20MHz spectrum leases.  Telus is leasing this spectrum over a population of 13 million, roughly 38% of Canada's population. Below are geographic maps indicating each of the areas where Telus will be leasing spectrum. In Canada spectrum leases are called subordinations of licenses.  We will discuss why this spectrum is important to Telus below with outputs from our Canadian Mobile Carrier - Spectrum Ownership Analysis Tool.

From the Spectrum Grid below, Telus is acquiring the downlink AWS-4  spectrum which lies within Band 66 which is now widely deployed in the US for both the AWS-1 and AWS-3 bands.  This will provide immediate service improvements once the network is constructed because handsets have been supporting Band 66 for several years.  The remaining part of the AWS-4 spectrum (for uplink), would fall into Band 23, which has little to no handset support.

We can see a second reason for acquiring this spectrum by looking at the Company Analysis module, detailing Telus's spectrum holdings in each of these Tier 4 service areas.

In many of these Tier 4 service areas (similar to US counties), Telus has limited or no BRS (2.5GHz) spectrum.  The BRS spectrum they do control in these markets is paired (FDD) Band 7 rather than the TDD Band 41 that Sprint controls in the US.   Overall, this spectrum acquisition provides Telus with an immediate capacity improvement since they can expand their Band 66 downlink capacity by 10 or 20MHz.

AllNet's Spectrum Ownership Analysis Tool has been updated to include all of the AWS-3 auction results in all of its Analysis Modules.  Below in the Spectrum Grid Module, you can see which carrier acquired the spectrum rights for each  of the uplink channels in the Top 5 CMA markets. 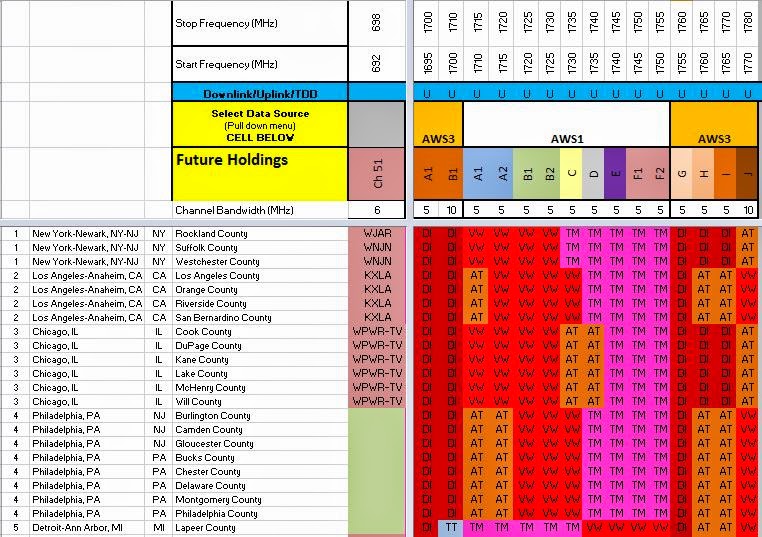 The screenshot of the downlink channels also provides a view into where Dish's AWS-4 spectrum fits with their new AWS-3 spectrum. 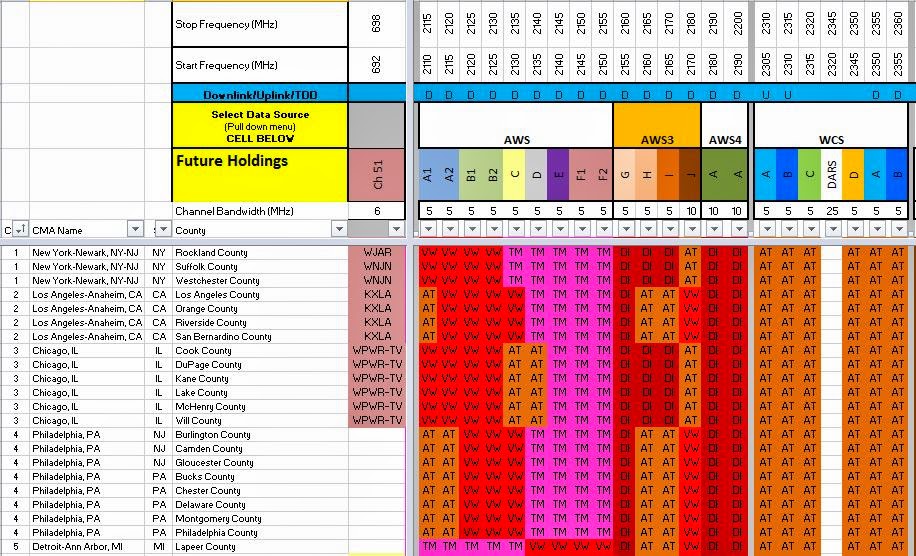