Verizon's announced last week that they were looking into broadcasting multicast video utilizing the LTE Broadcast feature, known in the standard as EMBMS - Evolved Multimedia Broadcast / Multicast Service.  After watching a video interview by Dan Meyer with RCR Wireless with Lynette Luna from Current Analysis I thought a short description of the challenge of multicast video would be in order. 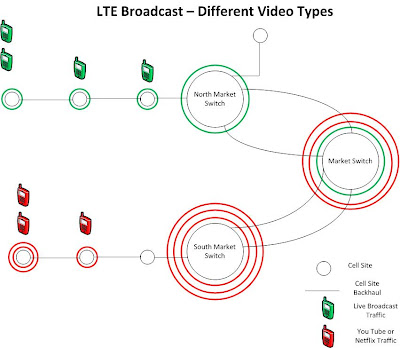 The goal transmitting multicast video is to limit the number of unique video sessions that are coming into your network, loading your switches, routers, cell site backhaul, and finally cell site RF capacity.  In the diagram above I have shown Netflix/You Tube video traffic in red.  From Dan and Lynette's conversation, this would be considered Over the Top (OTT) video, essentially video not provided or managed by the network carrier.  With 3 handsets all receiving a unique You Tube video or Netflix movie, there are 3 streams of video capacity (red circles) used at the market switch (2 are shown).  The South Market Switch still is burdened with 3 video streams.  The backhaul to the 1st cell site on the South market switch is still carrying all three video streams, but since no users are on the 1st cell site, no RF coverage is consumed.  The link between the 1st and 2nd site still carries 3 video streams while the link between the 2nd and 3rd site only carries 2 video streams.
Looking at the North Market Switch we can see what is desired with multicasting video.  The key is to realize that this video is synchronized for all users like a live sports game or a broadcast television program that starts at the same time for all users.  The network will have the intelligence to recognize that multiple users are requesting the same video stream and it will only set it up once on each switch, cell site backhaul, and cell site that has a user requesting the service.  You can see that there is one site off the North Market Switch that does not have a Live Broadcast User, thus neither the site or the site backhaul would be carrying that video stream, eliminating that required capacity.
I see this as a limited offloading opportunity.  US Consumers have been trained with DVRs to timeshift TV viewing and to utilize Quickskipping to eliminate commercials.  For consumers, applications like Dish Anywhere which allows me to record my programs, including Live Sports, and send them to my handset when I want to start them, will continue to be very popular.  This would be an OTT video example that I gave above.  Wireless carrier's could enable DVR functionality in the handset, allowing the customer to pause the live broadcast at their handset and continue playback at their convenience, but that is an expensive handset that doesn't exist today.